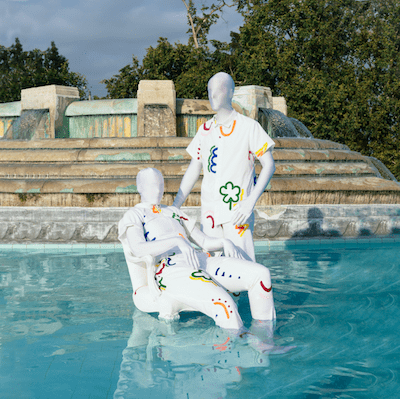 Tapping into a charming indie-pop vibe, ‘You’re Going To Heaven’ combines driving synths and grungy guitars with the duo’s impassioned vocals. It follows on from ‘I See A Dip’ and ‘Brain Masher’, tracks that both debuted at #30 on the FMQB radio chart. All three will feature on Polyplastic’s upcoming debut album Medium Complications out 1st April, a record that tosses out musical clichés to marry once-estranged genres and bridge unexpected emotions.

“I came up with the name for this song after visiting Zenkoji temple in Japan,” Charlie Ellis of Polyplastic explains. “When I was inside we did a walking meditation where you walk down stairs into a pitch black tunnel and wind your way through until you find the next staircase back up. As I was descending into the darkness a monk looked at me from above and said, ‘you’re going to heaven.’”

Blurring the lines between music, performance, fine art and fashion, Polyplastic invite audiences to become participants in their ethereal underworld. Looking ahead, they will kick off a mini tour at SXSW, with further dates in Texas, Colorado and New Mexico before the end of the month (full listings below), and then finally an exciting album release show in LA at The Troubadour on 8th April.

To find out more about Polyplastic, go to: