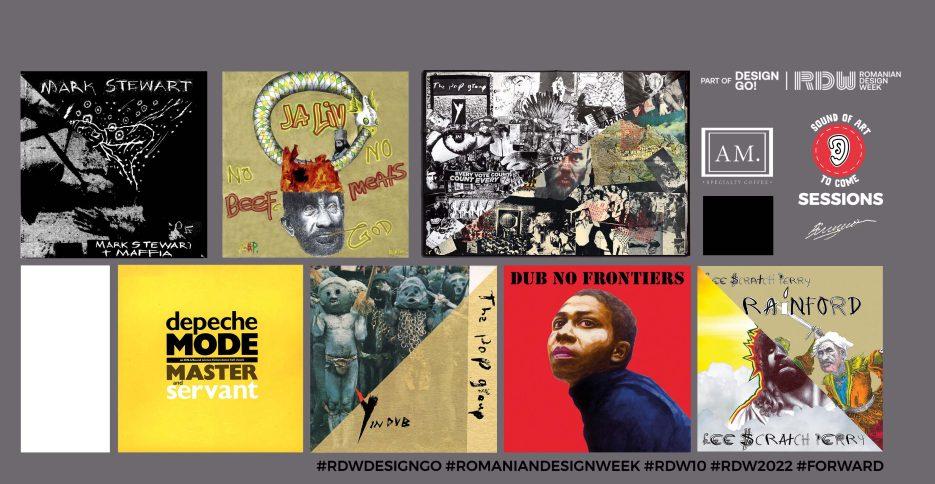 The Sound of Art to Come Records comes with a special showcase of punk/ post-punk / dub/ dada art on this years Romanian Design Week at the RDW: DesignGO! Event.

Sound of Art to Come is a platform activating the border between music and visual art. As a label, it is the home of Dub, Electronic, and Experimental music outcasts and exploring mavericks. The art and music of Sound of Art to Come are inspired by dada collages, dub, punk, and post-punk.

The Sound of Art to Come sessions are dedicated to UK & Jamaican music and dub as art, to reggae and bass music sounds all over the world inspired and connected with art charged with a certain dark spooky haunting aesthetic. It may sound strange but the concept focuses on the special sounds that bridge the gap between pop art culture and Caribbean culture.

Mark Stewart is both a musician and dada collage artist featured in the exhibition with his work on his band’s 1979 debut album, The Pop Group – Y and the 2020 version The Pop Group & Dennis Bovell – Y in Dub. Garth O’Donnell is the artist who created the Y in Dub collage. Also in the show are collages included in the Mark Stewart & The Maffia – Learning To Cope With Cowardice Adrian Sherwood produced LP, a collaboration of Mark with Anna Hurl. Because of the strong connection between Mark Stewart, Adrian Sherwood and Mute Records, who have released all the Mark Stewart and The Pop Group albums mentioned above we will also be hearing and featuring the Depeche Mode – Science Fiction Dancehall – Master & Servant/ People Are People Adrian Sherwood Remixes from back in 1984.

„Mark Stewart: Juxtaposing Is Always In My Life”

„Mark Stewart of The Pop Group is more than an inspiration for me. I found out that 1979 saw the poetic and political Stewart at the tender age of 18 debuting on record, with his band The Pop Group. Their music was being very far from what one might call pop in any decade, be it the seventies, eighties, nineties or our present day.

Many might consider the sound of Bristol something other than dub-influenced, funk-driven post-punk, but The Pop Group and their debut album Y demonstrate how you can make an LP that doesn’t feel dated at all some 40 years later. Garth O’Donnell’s collages truly bring that vision into a visual reality.”

„My first contact with musician and illustrator Peter Harris took place through the superb cover of Lee Scratch Perry’s Rainford album. For the album artwork, Peter has morphed a Lee Perry trio into the three horsemen of the Apocalypse. Intrigued by the cover, I found out their collaboration goes way back to the time they made the psychedelic painting and illustration for Higher Powers, a documentary film, an exhibition, and a book.

Peter Harris got me absorbed into a world where punk rockers are saints, there is female equality in the music industry and art world and his illustrations depict a world as insane and creative as what the pandemic made us experience and assimilate.’’

Mark Stewart is an artist, vocalist, producer and songwriter from Bristol, England. As a founding member of The Pop Group and as a soloist, Stewart has remained an anarchic and pioneering figure since the punk era, a constant source of discordance amongst the frontiers of post-punk, dub, industrial and electronic music. In a body of work driven by an explosive form of lyricism and inspired by radical politics, protest movements, theory, philosophy, technology, art and poetry, Stewart has fearlessly cultivated a revelatory collision of ideas, ideals and influences throughout an indisputably ground-breaking and seditious career.

Bucureci is deeply obsessed with Jamaican music, dub, reggae and dancehall sounds all over the world inspired by Horror films, concepts, art and a certain dark spooky haunting aesthetic. All his selections aim to be a pirate Eastern EU radio with music from across the decades since the 1950’s to present pandemic days.