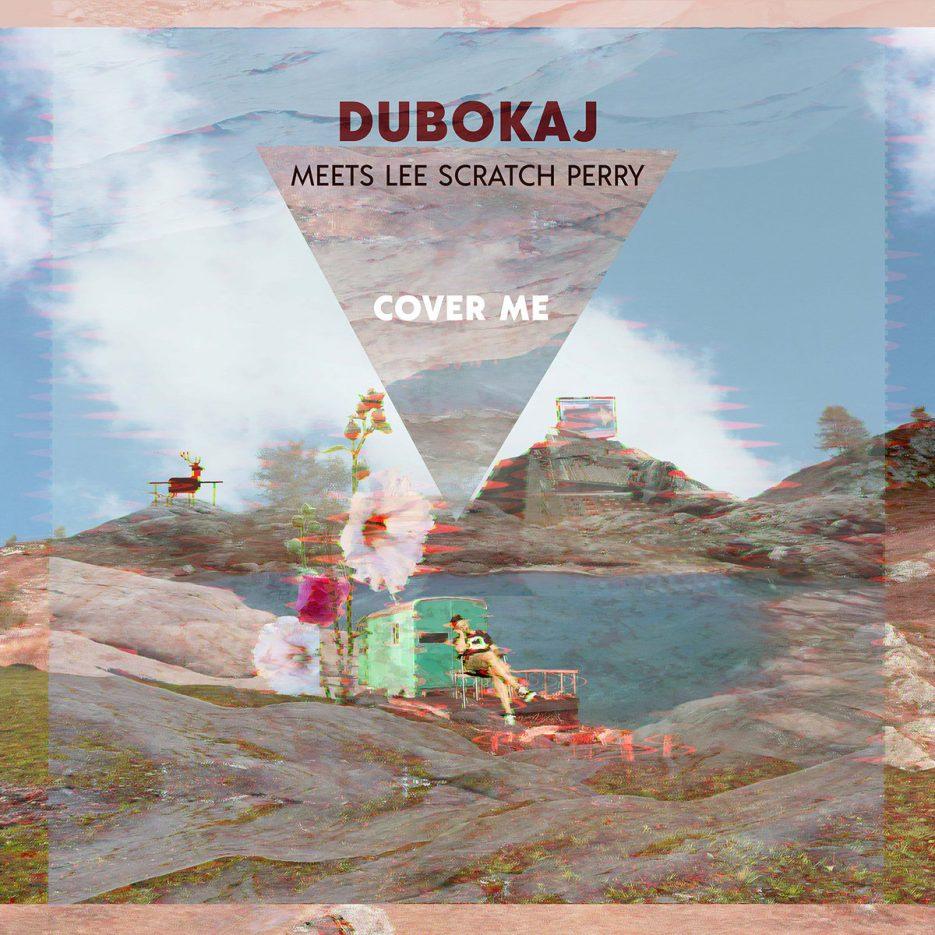 Cover Me was the highlight, the peak of the session at the Secret Laboratory. Both, me and Lee Scratch Perry, were very happy after we recorded it and we wanted to listen to it again and again.”

Cover Me finds the dub techno riddim master Dubokaj at work, effortlessly pulling out beats, synths and saxophone stabs into a fluid composition of Alpine dub. The song has its roots in the Trimoto Calim tune, from the Alpine Dub LP Dubokaj released in 2016.

For the song, Lee “Scratch” Perry is in a happy singing mood with a melodic delivery very different from his usual surreal dub poetry. The images he invokes though are a collage of street symbols, blue covers, red wine stealers, killers with firing guns, and the situation of ongoing wars in the world. Was Lee $cratch Perry an artist with a political message until the end?

From Police and Thieves, Ruff Ruff Street to Zion’s Blood, it very much seems so, and Dubokaj offers the perfect soundtrack to his magical supernatural madness and message!

Swiss based Mouthwatering Records in a partnership with Transylvanian based The Sound of Art to Come platform and label proudly present Dubokaj & Lee Scratch Perry second single off the Daydreamflix album – Planiemore.

Imagine heaven resides in the Swiss Alps. Or, at least it’s a musical match made in heaven: Dubokaj Meets Lee Scratch Perry, the Daydreamflix LP. This is Alpine Dub with some Lee $cratch Perry Alpine Love: environmental music for all generations after the quarantines of the pandemic.

The echoes of the Swiss mountains are translated by electronic surgeon Dubokaj in a soundclash session with the late Jamaican legend the Mighty Upsetter. Daniel Jakob aka Dubokaj aka Dejot, half of Filewile, is an artist and producer collaborating with dub and hip-hop artists from all over the world: Fortune Shumba, Mike Ladd, Pressure Drop and Dawn Penn. Over the years, he has been steadily putting out extremely personal sounds, remixes and visions on his own Mouthwatering Records. He also scored films such as Das Fräulein, Slumming, On The Line, Der Kameramörder.

Dubokaj has a background of some very healthy musical inspirations, both classic, like Lee Scratch Perry’s Revolution Dub and Return Of The Super Ape, King Tubby Meets The Upsetter At The Grassroots of Dub, Augustus Pablo and Scientist Meets The Space Invaders to modern mutations of dub such as Rhythm & Sound, Burial, Disrupt and the more abstract contemporary artists and labels like Seekersinternational, Equiknoxx and Bokeh Versions. After devouring a healthy dose of field recording albums like Félix Blume’s Fog Horns and conceptual books like Unsound: Undead and Michael E. Veal’s Dub: Soundscapes and Shattered Songs in Jamaican Reggae, in 2016, he started experimenting with his own environmental sound that he called Alpine Dub.

Dub as an art form and as science is also philosophy, and Dubokaj extracts the process without mimicking the Roots form. He cuts and pastes, plays around with oscillating tempos, sometimes  in a single tune – juxtaposes natural environments with in-studio sounds. On occasion, he even auto-tunes L$P, creating beautifully disruptive results. You can feel, in the very fabric of these recordings, that this session was more like a tennis match with a touch of ballet rather than a sound clash where each threw their best and hardest at each other. If Lee Perry would have ever scored a contemporary dance piece, Daydreamflix could be it.

All the collages illustrating the Daydreamflix LP are done by Cristiana Bucureci, who is a Romanian based collage artist. Cristiana has debuted with her collage art in 2012, with the Loud Blood Youth series, in collaboration with a local electro-fusion band. For the project she has illustrated 13 songs from the band’s mixtape. Her collages are the passport to a futuristic-decorative dimension, being made in mixed techniques, both digital and cut & paste. The artist has exhibited in Tel Aviv, at Romanian Design Week, in Bucharest, in Timi­șoara, Cluj and Iaș­i. Some of her work can be viewed on instagram.com/cristiana_bucureci/.

Mouthwatering Records is a Switzerland based independent label, publishing, management and artist development Company, releasing a variety of styles, from Hip Hop to Dubhouse, from Breakbeat to Soul-Jazz, with at least one foot on the Dancefloor run by Andreas Ryser and Daniel Jakob.

The Sound of Art to Come Records is a Transylvanian based platform and record label, home of Dub, Electronic and Experimental music outcasts and exploring mavericks from all over the world. Deep in the heart of the Carpathian Mountains, SoAC transmits from the dimension of The Shape of Dub to Come. The label curates, collages and remixes dubs and riddims inspired by film soundtracks.

Mastered by Adi Flueck at Centraldubs

Collage by our Art Director and artist Cristiana Bucureci of Creionetica